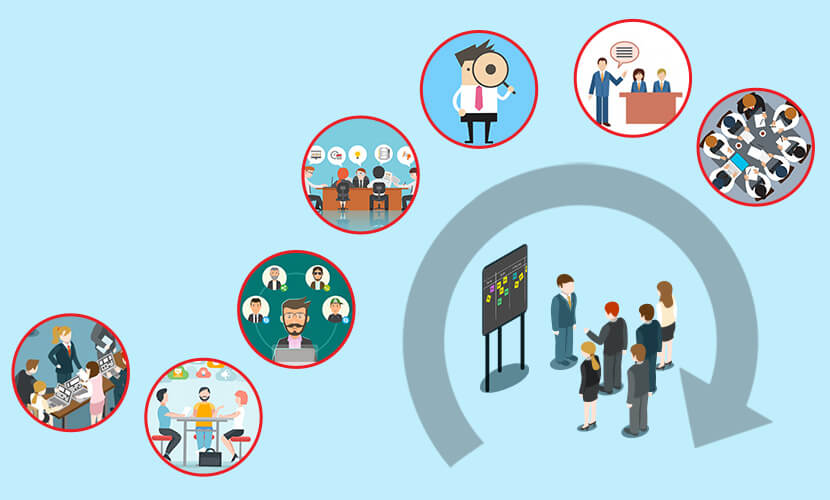 Here are a couple of mistakes that should be avoided in a daily stand-up.

Scrum is easy to understand but difficult to implement. And, therein lies the main problem – teams implementing the Scrum process often make mistakes how certain activities should be carried out in a manner such that the process becomes effective and is able to deliver a successful product release.

The daily scrum meeting, or the daily stand-up as it is commonly referred to as in Scrum should be ideally held in the manner as understood by reading and interpreting the official Scrum guide. The guide is definitive as far as Scrum framework is concerned, but since Scrum is a framework and not a methodology, much is left up to the users how the Scrum process ought to be implemented in a project. The guide describes the importance of holding the daily scrum but does not suggest how it should be held.

1. Not a status meeting

One of the commonest mistakes made by teams new to Scrum is to discuss work carried out by the team during the previous working day’s sprint – and that too in details. The daily scrum is time-boxed to 15 minutes. If all team members were to report their daily work in the stand-up, a majority of the time would be spent in discussing the team’s progress. Scrum has the sprint review and sprint retrospective events to analyze how the team is performing and what it should do to improve. The daily scrum should not be used as a status-reporting meeting because the Scrum process can automatically detect the development status through the velocity and burn down charts.

Another common mistake that often occurs in a stand-up is that the scrum master starts issuing instructions to the team members, or starts planning how the team members should carry out a particular development activity. Scrum advocates self-management and self-organization. Team members should realize their responsibilities and collaborate to solve process related issues. The scrum master or the product owner should not try to micro-manage the team activity.

3. Not meant solely for the scrum master

There is a big misconception that the daily scrum is meant for the scrum master. This is far from true. The role of a scrum master is to facilitate scrum proceedings and oversee that the team implements the scrum process properly. He/she has to remain present in all meetings, including the daily scrum. Just because the SM attends the event and stands in front of the team, it does not mean that he or she owns the event. Neither does it mean that the team has to “report” to the scrum master. The SM merely oversees that the team remains updated about the current sprint status, and reports what was done the day before to facilitate the feedback loop in Scrum.

4. Not a planning meeting

Scrum supports the sprint planning meeting or event to decide which product features should be developed by the team during the sprint. The sprint review meeting is held to evaluate the development carried out and plan how to make the next sprint more effective. The sprint retrospective meeting is held to reflect upon the effectiveness of the Scrum process and what more should the team do to enhance the process. The daily scrum should not be used for planning purposes since there are other events specially held to plan and monitor the process.

5. Not to be used for carrying out technical discussions

Development teams need to discuss technical aspects whenever they face problems. When a technical issue is reported as an “impediment” during the daily stand-up, the SM has to resolve the issue later on, and not while the event is in progress. The daily scrum should not be used for discussing technical problems – the team should do it later on.

6. Not to be held away from the place of work

The daily scrum meeting is generally held in the place of work, or in the same building or location. The idea is the team can immediately start working as soon as the event completes. Time is often at a premium and it needs to be utilized wisely.

7. Not including the three basic questions

The three questions fundamental to the daily scrum:

1. What was done the day before?

2. What is proposed to be done today?

3. Did the team face any problems or impediments?

The meeting should always try to focus on these three questions during the daily stand-up since they form the base of the meeting.

Do you want to start daily scrum meeting?